Outrage at State Snoopers and Infiltrators 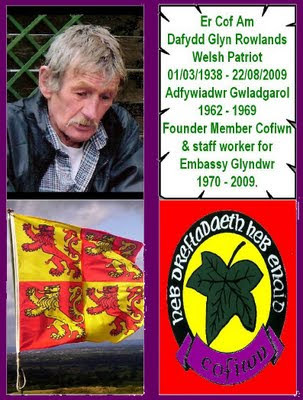 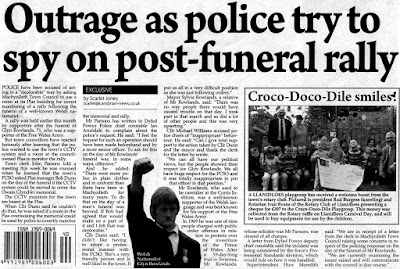 POLICE have been accused of acting in a “deplorable” way by asking Machynlleth Town Council to use a room at its Plas building for covert monitoring of a rally following the funeral of a well-known Welsh nationalist from Corris.
The rally was held earlier this month after the funeral of Glyn Rowlands, 71, who was a supporter of the Free Wales Army.
Town clerk John Parsons told a meeting this week he was stunned when he learned that the town’s PCSO asked Plas manager Bob Dunn on the day of the funeral if the CCTV system based at the Plas could be moved to cover the Owain Glyndŵr memorial.
When Cllr Dunn said he couldn’t do that, he was asked if a room in the Plas overlooking the memorial could be used to covertly monitor the memorial and rally.
Mr Parsons has written to Dyfed Powys Police Chief Constable Ian Arundale to complain about the police’s request. He said: “I feel the request for such an operation should have been made beforehand and by a more senior officer. To ask for this on the day of Mr Rowlands’ funeral was, in some ways, offensive.”
He added: “There were more police in plain clothes and in uniform than there have been in Machynlleth for many years.
“To do that on the day of a man’s funeral was beyond. If Bob had agreed that would make us a part of it and I felt that was deplorable.”
Mayor Sylvia Rowlands, a relative of Mr Rowlands, said: “There was no way people there would have caused trouble on that day. I took part in that march and so did a lot of other people and this was very upsetting.”
Superintendent Huw Meredith said: “We are in receipt of a letter from the clerk to Machynlleth Town Council raising some concerns in respect of the policing response on the day of the funeral of Mr Rowlands.
“We are currently examining the issues raised and will communicate with the council in due course.”

http://welshremembrancer.blogspot.com/2009/10/security-services-show-disrespect-to.html
Posted by Unknown at 16:42