Lost Lands of our Fathers 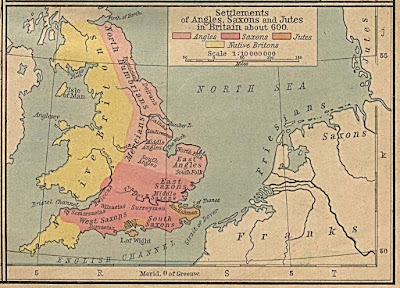 In 410 the Roman emperor, Honorius, told the local authorities in Britain that he could not send any reinforcements to help them defend the province against 'barbarian' attacks.
The newcomers were not so much invaders as NEW OCCUPANTS who at times fought against the Britons -- or as the Invaders called them the wealas , an Anglo-Saxon (Old English) word meaning slave or foreigner. Curious attitude and viewpoint, but very Anglo-Saxon indeed, to look on the legitimate residents or inhabitants of another land they are invading or systematically occupying as the "Foreigners" or "Slaves," when it is THEY who are the foreign entities forcing their entry under their own imposition. Moreover, in many areas not far from the coastlines of Britannia (Britain) much of the settlement was peaceful with some Germanic-Danish farmers and craftsmen integrating themselves into existing communities. The numbers of the "invaders" was certainly large at times, and they certainly did affect the nature of Bretisc (Briton) society, even to the extent of replacing in protracted manner the primary Celtic language. They did not wipe out the aboriginal inhabitants of the land, although there were thousands of deaths involved, along with rape, looting, and appropriation (as all invasions do in the end). At first, the arrival of the initial hordes was violent and bloody, but as the decades flew by, they realized that assimilation and blending would be a more effective strategy. Nevertheless, there were not always Bretisc communities who were too willing to let the invaders simply come in and take over their lives, and thus resistance and fight were inevitable outcomes. On the other hand, it is certainly NOT true that the Celts were, nor ever have been, a weak nor a compliant or complacent lot. On the contrary, they were a highly nationalized and hearty race always pressing onward in their struggle for their lands and survival.

Whatever the assumed or inferred "facts" may be, it is more likely than not that there were in actuality a mixture of all the speculations and conjectures which have been handed down to us in recent years by the "experts" in the field. The fact is that in some regions and places the native Britons were entirely, or almost entirely, replaced by the newcomers, while in other places the two peoples lived side by side, gradually blending in with each other through miscegenation. Still, in other places, especially the more remote regions to the north, the population remained almost exclusively Bretisc, although these "British" people gradually adopted some of the ways and parts of the language of the invaders. (This gave rise to the modern English speaker who still retains the ancient mother tongue and genetic or national character of that remote and venerable past.) Here is an extraordinary fact and principle of invasions and occupations which allow for the COEXISTENCE of both races. This was precisely the "miracle" of the British island which came later to be called "England." The Britons and the "Anglo-Saxon" occupants and newcomers both allowed for the blending of customs, actions, traditions, and community actions -- LANGUAGE, only to some extent. For, it was with the passing of Time that essentially the Anglo-Saxon mixture of the invaders' dialects merged to reshape and give rise to the incipient language form now known as ENGLISH. In brief, with the passing of the decades and Evolutionary Time, ANGLO-SAXON originated (now named "Old English" by linguistic study); and it was this ultimate product which united the British peoples in the end. As time went on, Old English evolved further from the original Continental form, and regional dialects developed. The four major dialects recognized in Old English are Kentish, originally the dialect spoken by the Jutes; West Saxon, a branch of the dialect spoken by the Saxons; and Northumbrian and Mercian, subdivisions of the dialects spoken by the Angles. By the 9th century, partly through the influence of Alfred, king of the West Saxons and the first ruler of all England, West Saxon became prevalent in prose literature. A Mercian mixed dialect, however, was primarily used for the greatest poetry, such as the anonymous 8th-century epic poem Beowulf and the contemporary elegiac poems.
http://www.geocities.com/meister_z/ANSAXNVA.htm
Posted by Unknown at 01:07

Well, I am half welsh and I do not completely agree with you, but I still this that Celts have more rights to colonise the english than the zionist Jews have to colonise palestine, You may check my blog to see. I still believe it is wrong for the english to not allow, us as celts to have our own language and to keep it. I still believe that colonising the English is wrong. If the english and french are really oppressive and don't let us have our own languages, then I would support independant celtic states, but if the english are not oppressive I will not support independant celtic states. I do not know what goes on in Walse, because I have been brought up in england and only my father's welsh and my mum's half english and half irish. I still consider myself a modern celt and whether I like it or not I am a celt, I can't control it, whatever people say about me. I definately like your idea of a united Ireland, that would save a lot of taxpayers money.

In all fairness Alun the Celts were not the original inhabitants of these Isles either.

The Celts settled/invaded the British Isles before the Romans did. There were people here before the Celts arrived.

It happens all through history. No one is native to any land as our human ancestors moved around alot.