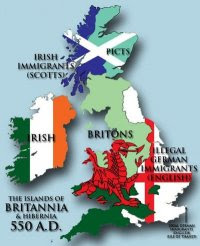 A letter from Australia

When people hear the word 'Britain' their instant thought to mind is 'England'! Yes, England is a part of the the United Kingdom of Great Britain along with Wales, Cornwall, Scotland and Northern Ireland! But do they really understand what the word 'British' means?

It is a term that has been lost or should I say stripped off the Welsh & Cornish people in the midst of History!

I think it's about time that the Welsh & Cornish revive this term and bring it back to Wales & Cornwall where it truly belongs within its roots! How many times have you been somewhere abroad on holidays and hear an English person refer to themselves as British?!? About 98 times out of 100, that's how many! But do they and everybody else around the world know the true meaning of the term?

The term British or Briton was the name given to the inhabitants of the island of Britannia/Britain, the Brythonic Celts i.e. Welsh, Cornish, Cumbric and maybe Pictish! They spoke a Brythonic/Brittonic language i.e. modern day Welsh, Cornish, Breton and Cumbric (the later sadly extinct)! They inhabited the island of Britain long before the Saxons, Jutes, Angles (modern day English) arrived from 440 AD onwards, who were Germanic tribes and speakers of a western Germanic language! Now although they refer to themselves as British, are they? Do they speak any Brythonic/Brittonic? NO! Even the Scots are not, while Cumbric died out in Strathclyde & Pictish in Pictland; and the actual 'Scots' themselves are Gaelic Celts originally crossing from Ireland to Scotland, who mixed with the Picts. So there is how the term misleads people all over the world and I think its about time the Welsh stood up and proudly claim what is rightfully theirs!

So when asked what nationality you are, don't stubbornly say 'I'm Welsh/Cornish not British' like most Welsh seem to do, you're just stating what the government and the others want you to state! Proudly say 'I'm a true Briton' You've got every right even more right to state your Brythonic/British roots than anyone else in U.K! Lets promote ourselves like other countries do and get this point across the world and teach people and tourist the true history and terms when they enter Cymru (Wales) or Kernow (Cornwall)

This group is open to all you Welsh & Cornish folk who want to get your points across and anyone else who is open for discussion! This is not a racist group* and does not promote such a thing, everyone is welcome to express their views and find out about heritage and the history of Britain and the Celts!

Jason Perry
Location:
Sydney, Australia *it is a new group on Facebook
Posted by Unknown at 01:10

You've read my mind, the English and the Scots are in no way British; they needed a name for their union in 1707 and chose the one that was there before them, thereby usurping our very identity and making it very difficult to explain who we are. I don't like it when the Welsh say that we are are not British, or even Cambro-British, because that's exactly what we are. Let's argue our identity back, I do it every day.

I love the map. The English as 'illegal incomers'? Tell it to the Daily Mail. You can never remind some often enough of where the term 'Britain' came from.

I admit to being a little hasty as far as the Scots are concerned, although they push their Gaelic heritage now, it wasn't always that way; Caledonia was inhabited by the Picts, who were part British, and Strathclyde was one of the most important Kingdoms of the Britons. Kenneth McAlpin, who united the Country was King of the Picts, and one the most famous Scotsmen of all, who gave his life for the Country, was the Briton, William the Welshman.

I can remember seeing "Brits Out" graffiti in Bangor (Wales not Ulster) which used to make me smile.

As a 'Cymro', I am a Native Briton NOT a Brit! There rally is a massive difference!!!!

As a 'Cymro' I am a Native Briton, NOT a 'Brit'! There is a massive difference.

Yes its true according to updated genetic tests -http://www.dailymail.co.uk/news/article-2160853/For-truest-Brits-west-Welsh-Cornish-ancient-Britons-DNA-analysis-finds.html

Yes its true, the Welsh and Cornish are the true Britons according to the new and updated genetic tests -

Anonymous said...
Yes its true, the Welsh and Cornish are the true Britons according to the new and updated genetic tests -


Oh for goodness sake not the genetic fallacy. You do realise all DNA tests are based on modern genetic studies, don't you? In fact when you make such a claim you're committing a logical fallacy similar to a post hoc ergo propter hoc.
To finish I'll quote, Professor Guido Barbujani, "It goes without saying that haplogroups are not populations, gene trees are not population trees, and the age of a haplogroup has got nothing to do with the age of the population where it has been found).", so shall we stop this nonsense of welsh DNA etc.

Thank you very much. I am a Sudanese PHD cadidate. My research thesis is about antislavery discourse in English poetry. I discovered the fact you mentioned about the true Britons and I believe that English are the people who practiced slavery and slave trade not the Britons, on the contrary, the Britons are the abotionists because nearly all the abolishment poets are Britons. Thanks again for this fruitful fact and piece of information.

Thank you very much. I am a Sudanese PHD cadidate. My research thesis is about antislavery discourse in English poetry. I discovered the fact you mentioned about the true Britons and I believe that English are the people who practiced slavery and slave trade not the Britons, on the contrary, the Britons are the abotionists because nearly all the abolishment poets are Britons. Thanks again for this fruitful fact and piece of information.

That explains Black Americans called Jones, Williams and Davies then.... nothing to do with Welsh involvement in the slave trade!! :)

Also - populations move and intermingle - all Brits are descended from original incomers / later incomers.... Tom Jones has 3 English grandparents out of 4.... You are living in a deluded 'pure blood' fantasy