On the Subject of Ireland..... 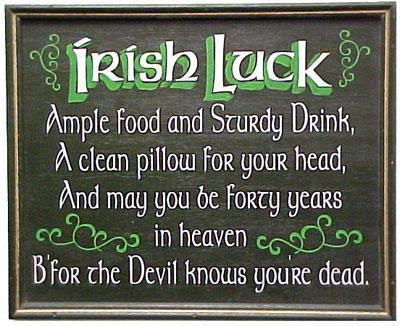 According to Lonely Planet travel guide, Ireland is now the friendliest nation on planet!
“Centuries of turmoil, conquest and famine – and subsequent immigration – have certainly taken their toll on the Irish; it’s left them with a delicious dark sense of humour and a welcoming attitude towards strangers” claims the guide.
That famous ability of the Irish to find the craic (fun times with convivial company ;-) ) in bum or bust times – means you’re always in for a treat.”
It isn’t just the lack of food or abundance of invaders, that according to the book, has made Irish so happy – the sorting out of that unfortunate business up north has boosted Irish moods to an all-time high.
“These days, after the end of “Troubles”, a cautious optimism reigns supreme, infecting the land once again with the sense that anything’s possible” it adds.
The tip-driven smiles of the Americans have landed the US in second place, though residents of few nations may not agree.
“Blamed for the coming of World War III, the Anti-Christ, Bon Jovi, Tom Cruise, Michael Jackson, rampant street crime, and noise pollution through overloud talking, Americans just take it all in their stride” says the guide, claiming Americans will do anything to make you feel welcome.
Poverty stricken Malawi was third on the list (they can’t afford not to be) while Scotland, Turkey, Samoa, Thailand, Fiji, Indonesia and Vietnam made up the rest.
Needless to say Ireland also made it into the top ten on the Best Brews Bluelist – cheers for that, Guinness!
Posted by Unknown at 18:51