All for One and One for All 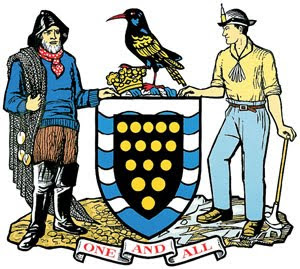 "One and All - Onen hag Oll" is the Cornish motto. The Cornish, like their fellow Celts in Wales and Brittany, were an egalitarian society, unlike the hierarchical English who confined them to their western peninsular. They had a strong sense of solidarity and mutual reliance and co-operation. They rebelled against perceived injustices and when they found the pressures too great to bear they hoisted their sails and made for France. Thus Brittany became little Britain and the customs and language continued to thrive and flourish, the difference being that they forgot their English and were obliged to learn French and eat crepes. Later, many returned to Britain with Duke William of Normandy and took up residence in Britain once more after wreaking their revenge on the Mercians and Saxons who themselves were obliged to learn French and defer to their lords and masters.

"United we stand, divided we fall" - this phrase sums up the attitude of the Celtic peoples and should remain so in this present age. The Welsh, Cornish and Bretons were one people, along with Cumbrians and people of Strathclyde. They shared the same language, culture and tradition, the same Celtic heritage, and were only later separated, despite fierce resistance by such legendary generals as Arthur ("yr arth"-the bear) - born in Tintagel castle, Cornwall, the son of Uther Pendragon - and then were confined to their western retreats. Over time the Brythonic language diverged into Welsh, Cornish and Breton but was instantly recognisable as having the same origin, the differences being mainly superficial, with spelling changes - ty/chy for example (house), and cwrw/coroff (beer).

Music festivals held in Celtic lands - Cwlwm Celtaidd in Porthcawl, Wales, Lowendar in Perranporth, Cornwall and Lorient (An Oriant) in Brittany have brought people together to experience the unique and haunting sounds of Celtic musical tradition, encompassing all the Celtic nations. Similarly in Ireland, Isle of Man and the Hebrides festivals are held annually, bringing together people from far and wide. Talented performers such as Alan Stivell, Dafydd Iwan and Irish dancing groups, notably Riverdance, helped to revive the ancient musical tradition, where the instruments, bagpipes, bodran, harp, whistle and fiddle combined to produce an unmistakable and unforgettable experience. The north-western seaboard of Spain and Portugal share in this musical tradition, still popular in Asturias and Galicia, though the Celtic language has long disappeared.

The spirit of "all for one and one for all" - the essence of Celtic custom, the understanding that "united we stand, divided we fall" served these peoples well in the past, keeping their culture and to an extent their language, alive, during many dark days of persecution by more dominant neighbours. It is a spirit which should permeate the consciousness of all who aspire to the creation of a better, more just and equitable, society throughout these islands. Now is not the time to set sail for France or journey to the Americas, but to metaphorically fight on the beaches, not only with music but with words and cogent arguments to bring about a return to the promised land, a resurgent Tir Na nOg, with a renewed sense of hope and expectancy.

It is not the politicians only, the rabid unionists elected to parliament in Westminster, who need to be convinced but the peoples of these nations who as yet are unable to grasp the vision which independence offers and mistakenly believe that British nationalism can answer their demands. Not with swords, as in past ages, but with keyboards, pens and ploughshares will we build the future and restore the values of a fair, just and equitable society in the nations of the Celtic West.


"The Roman author Strabo wrote that among the Gauls there wer three groups of men who were held in exceptional honor: the Bards, the Vates, and the Druids. The Bards were the musicians, singers, and poets. The Vates were soothsayers, diviners, and natural diviners. Ancient Celtic religion, that underpinned every aspect of everyday life, was nature-venerating and polytheistic, recognizing many levels of supernatural beings and divinities, female as well as male. The Celts believed that the course of nature is the will of the Gods. Thus they venerated both local and general deities, usually in natural sanctuaries, especially shrines at springs, rivers, lakes, and in woodland. The Bards, Vates, and Druids had an integrated relationship with the natural world. They possessed an immense body of traditional lore, concerning nature, the seasons, astronomy, death, and transformation. Most of the ancient skills and wisdom of these men are known still, underlying contemporary Celtic spirituality, that is the synthesis of Celtic Spirituality, that is essential for a continuing, living tradition."

Dafydd Wigley writes: The new First Minister will have his or her time cut out in living up to the popularity of Rhodri Morgan. There will be huge economic challenges arising from the recession. The Assembly, as with all UK public sector bodies, will face a financial squeeze.There will be tensions if, as expected, the next UK Government at Westminster is Conservative, with a very different agenda to that of the Labour-Plaid coalition in Wales.All this will inevitably lead to calls for an early referendum to give the Assembly full parliamentary powers.We are entering a new era of uncharted waters.