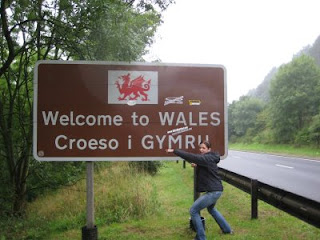 For many emigrants to the New World and afficionados of the game of rugby the word "Wales" must make the heart beat faster, but the word is derived from the Saxon word for foreigner. The native Britons of Celtic and indigenous stock, left to defend the island of Britain following the departure of the Romans, were depicted by Angle and Saxon invaders as foreigners ('wealas') in their own land. Conversely, the English invaders were named 'saeson' by the Britons (the word also meaning 'foreigner' or non-British speaker). The point is that "Wales"' and "Welsh" are names given to the native peoples of Britain by the invaders and the name "Cornwall" refers to the Welsh of the peninsular to which they were confined.

Thus, the people of Wales are foreigners in their own land, much as the Kurds are, in a land which they call home but which is subject to an invasive force which has imposed its alien culture on the inhabitants. Years of indoctrination and use have inured the people to the acceptance of a foreign name as their own, so much so that the heart beats quicker when this name is invoked, on the rugby field  or the Eisteddfod maes.  However, it so happens that the so-called "Welsh" have a proud name of their own as well as for their land, or the remaining land which was not usurped by the settlers from Germany. These lands comprise Cornwall, Wales and Cumbria. Strathclyde and Galloway are now a part of Scotland but were also home to the Britons. The name which describes the British tribes under Roman rule is the Cymry and their land is Cymru.

The Cymry settled in the lands now geographically described as Wales, Cornwall, Cumbria and Strathclyde. The remaining lands of Britain were overrun by the Norse invaders in Northumberland (originally home to the North Cymry) extending to Yorkshire and Lincolnshire, Norfolk (north folk) and Suffolk (south folk), while the plains of Mercia (the Midlands) were occupied by the Angles and southern Britain by the Saxons. (in Sussex,Wessex, Essex). Devon (variously spelled Dyfnaint/Dewnans/Deunans) was a Celtic homeland and the Brythonic language was spoken there during the "Dark Ages" following the invasions. Many Devon placenames remain as evidence (tor, combe, pen, lan, pol, etc.).

Presumably, following the declaration of independence, one of the first acts of the Welsh (Cymric) government will be to announce that the nation of Wales will forever after be named "Cymru". After so many years of use and custom it will seem strange to many inhabitants of Cymru to refer to their homeland by a different name but at least the name will be authentic as well as official. We are at the start of a new year, 2010, so it would seem appropriate for all of us, who care for the nation of which we are a part, to use the correct nomenclature from now on  and get accustomed to calling the nation and its people by the correct name. From henceforth, as far as "Independence Cymru" is concerned we will refer to "Wales" as Cymru, the people of "Wales" as the Cymry, and the "Welsh" language as Cymraeg.

I hope Cymru & its derivatives increase in usage. Compared with the fate of "Éire"-- relegated as the 20c went on to only coins and postage stamps, I suppose due to partition and Saorstát Éireann being replaced by the partial Republic? Áiléin/Alun...Athbliain Mhaise duitsa/ Blwyddyn Newydd Dda!