They'd Rather You Didn't Know! 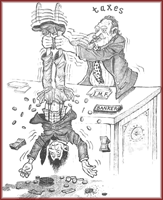 All three main British Unionist parties are doing their utmost to avoid mentioning "cuts" and "tax increases". They don't want to alienate the voters. Yet that is what is bound to happen. It is unavoidable. Alex Salmond wants "more nats, less cuts". A laudable aspiration, but what the public will get after the election is savage cuts and higher taxes for all, either in the form of income tax or V.A.T. increases. What is fairly certain is that there will be an increase in V.A.T. and cuts in all public services, along with "efficiency savings". Depending on which party is elected there may also be a rise in national insurance and a cut in some benefits, especially for the higher earners.
Scotland, Wales and Northern Ireland will see a cut in their funding. These measures will cut the deficit but will not alter the fact of the national debt, which will take much of the present century to pay off. Apart from that the interest on the national debt has to be serviced. The age of austerity has indeed arrived. Have no illusions, and remember - if the truth is to be told you will find it here.
Posted by Unknown at 07:03