The Make or Break Election

As the Conservatives battle for the 100-plus seats needed for a parliamentary majority, Scotland, still angered by Margaret Thatcher's rule, will be doing little to help their cause.Skip related content

The recent surge in popularity of the Liberal Democrats makes it much harder for the Conservatives to win crucial marginal seats and in Scotland they face added competition from the Scottish National Party.
The SNP, which is campaigning for independence from England, has even said that a much feared "balanced" or hung parliament, to which opinion polls are increasingly pointing, would offer a great opportunity for Scotland.
"The thought causes panic in the Labour andTory ranks. But it is a development that is welcome here in Scotland and one which we embrace enthusiastically," Scottish First Minister Alex Salmond said.
One Scottish voter in the oil city of Aberdeen said she thought a hung parliament could be a useful tool.
"I think anything that challenges the government is more likely to keep it honest," said Beth Gillard, who also believes more power should be given to the Scottish parliament.
While Scotland has its own government based in Edinburgh, including powers over health,education and tourism, it also sends 59 Members of Parliament to sit in Westminster.
In the last vote in 2005, the Conservatives won just one seat, with the poll dominated by Labour and Liberal Democrat voters.
This time around they are hoping for 11 MPs but the majority of the marginal seats are also being contested by the Liberal Democrats, who are already well represented across the country.
Lib Dem leader Nick Clegg told BBC Radio Scotland on Monday that the choice for Scottish voters was between his party and Labour. Labour has 39 MPs north of the border, against 12 Liberal Democrats and seven for the SNP.
"The Conservatives are as irrelevant north of the border as the SNP is not really in the game south of the border," he said.

From the President of Plaid Cymru

Dear friend,
You know that our ideal as a party is freedom and independence for our nation. You will know that, at heart, this is what spurs us on to fight for the cause. What better blow for the British parties and their London masters than seeing the election of the largest ever number of Plaid Cymru Members of Parliament? Imagine the shock to the British establishment. We have 7 days left to distribute a million leaflets, to phone thousands of supporters and to persuade the biggest ever number of Welsh people that we are a party that can make a difference for Wales.
Two rallies will be held during the last week of the campaign to boost campaigning activity across the nation – one in the north and one in the South – on Monday, May 3rd (the Bank Holiday) where a number of party stars will be present. We hope that we can replicate the successful rally held in Aberystwyth on Saturday - it’d be great if you could be there!
Ynys Môn: Biwmaris in the White Lion Pub Square (opposite the Castle) at11.00am
Llanelli: Llanelli – on the green in front of the Town Hall at 10.30 am
For Wales
Dafydd Iwan 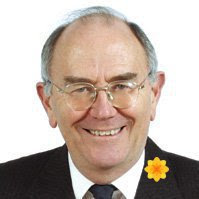 Dr.Eurfyl to Replace Asghar in the Assembly

Wales will have to fight for EVERY penny after the election - irrespective of which party wins- Labour, Liberal or Conservatives- they are going to 'slash' spending.

The Nations needs a champion to take on the Treasury and 'bring home the bacon' for our hospitals & Schools in Wales.

It does not matter which party you support - we must have people of the calibre of the 'Good Doctor' batting for Wales .

It's simple - that treacherous Mohammed Asghar should not be in the National Assembly of... (read more)

"They talk only about the small tip of that iceberg - the cuts they are prepared to argue amongst themselves on.  While all of them agree about the huge cuts they would all implement, but are not prepared to talk about.

"The SNP, which is campaigning for independence from England"

Should that not be the UK?

The UK is in effect England, as the major laws and funding are directives from Westminster. Scotland, as part of the Union, should be responsible as an equal partner but for centuries has been subjected to English (British) law and jurisdiction.

Thanks for that and I am a SNP supporter and voter. Scotland does have by in large its own legal and law making decisions but not nearly as much as I would like.

The problem I have with using "England" as to using the UK is that it can become in some eyes a grievance towards our neighbors rather than an aspiration for leaving the UK.
Independence can not come fast enough for me and I do wish Plaid all the best on her efforts for a Independent and better Wales.

What is "Great Britain" but England with other bits attached.