From the blog - The Breton Connection 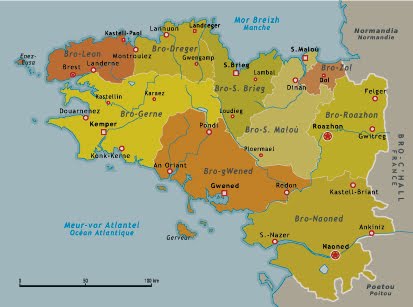 A weekly ferry route between Cornwall and Brittany? 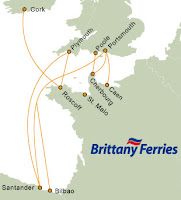 A proposed weekly ferry route between Brittany and Cornwall is currently being discussed and a feasibility study into the venture is being carried out.
A and P Falmouth, the company which runs the docks in the town, is leading a consortium to run a route between Falmouth and St Malo, but so far no ferry company has shown an interest in taking up the idea. In addition to the ferry service there are plans to create an international partnership between University College Falmouth and Rennes 2 University to develop cultural and artistic links.
On 27th April 2011 the French General-Consul in London, Edouard Braine, was invited to visit Falmouth by the Falmouth Chamber of Commerce International Development Officer Pierre Cuignet. Mr Braine was supportive of the project during discussions at Tremough University campus and said he was moved by the hospitality and positivity he had experienced.
The Operations Director at Falmouth Docks, Mike Reynolds, told the BBC that:
"There's no link from this far west and yet there is a lot of traffic coming out of France which has to go a long way up the channel and then has to come all the way back down in order to get to Cornwall."
Mr Reynolds warned people not to get too excited yet about the development, because the project was still in its initial stages and pointed out that the service was unlikely to be a car ferry. Tim Light, who runs Cornwall Ferries, told the BBC:
"I think it would be absolutely fantastic, both for Brittany but also for Cornwall to have a physical link, which would also tie-in in with all the many festivals, the local food and drink production and of course the great Universities at Tremough and also the University in Rennes."
Currently the closest ferry route to Brittany from Cornwall is in Plymouth, England and is operated by Brittany Ferries. In the 1970's before Brittany Ferries first began operating, the company purportedly approached Cornwall Council about creating the first link between Brittany and Cornwall, only for the Council to turn down the offer arguing that the road infrastructure in Cornwall would not be able to cope with the increased number of cars on the road. Over the last few years a number of festivals have developed in Falmouth with Breton links, such as the inter-Celtic Aberfest festival, Cornwall International Film Festival and the Falmouth International Sea Shanty Festival.
Posted by Unknown at 14:45