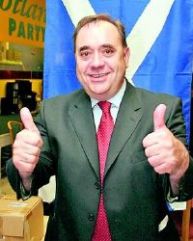 This blog predicted a stunning success for Alex Salmond and the Scottish Nationalist Party in Scotland.
The result has borne this out and Scotland is now certain of a referendum on independence. This Stunning National Party has been given a clear mandate by the people of Scotland. Alex Salmond and Nicola Sturgeon are well pleased with this outcome which Alex describes as "historic" and which Nicola describes as "stunning".


This blog also predicted a successful result for the Labour Party in Wales. Plaid Cymru failed to make further inroads into the Labour heartland and the party is losing seats in the Assembly. The Welsh people have yet to be inspired and given the bold vision that Alex Salmond has succeeded in giving to the Scottish people. There will be questions about the leadership issue, as Plaid must change its direction and strategy if it is to emulate the success of its sister party in Scotland. It needs to develop the dynamism and positive nature that is all too obvious in the SNP approach to politics.


A Reminder
Scotland: Alex Salmond and the SNP will be elected into government with a comfortable majority over Labour.....


Wales: Plaid will fail in its bid to overtake Labour and Carwyn Jones and Labour will form the majority party and govern alone.....


N. Ireland: Once again Sinn Fein and the DUP will gain the majority of votes for Stormont with a good showing by the SDLP and the peace process will continue but with growing support for unification.

Not only Stunning but Stupendous!

Posted by alanindyfed at 14:47 1 comments

Links to this post
It happened in Scotland but not in Wales.
Even the Conservatives in Wales have overtaken Plaid.
There needs to be a thorough examination of the reasons for the decline in votes and loss of Assembly members, and a shake-up needs to take place, in terms of:
1) Direction
2) Strategy
3) Policy
4) Leadership
This blog suggests that Jill Evans be brought over from Brussels to take charge of the party, and the whole party machinery be overhauled.
Alex and Nicola in Scotland have shown that it can be done, but the correct criteria need to be in place. Purpose, determination, inspired leadership and charisma are among the elements for success.
Note: the voter turn-out in Scotland (50.7%) relative to the turn-out in Wales indicates that the people of Scotland are more motivated and politically aware - a result of the inspiration and vision given to them by their politicians. Compare the levels and tones of debate between that of the Scottish Parliament and that of the Welsh Assembly, a vivid contrast between drama and mediocrity.
N.B. Follow the course of the imminent vendetta between Clan Salmond and Clan Cameron on this blog in the months and years to come.

David Cameron will staunchly stand by the British constitution and Scottish independence will come 'over his dead body.'
Alex Salmond is grimly determined to lead Scotland forward to full independence come what may.
This is only the beginning.........

Press Association – 49 minutes ago
The SNP has secured an unprecedented victory by taking a majority of seats in the Scottish Parliament election.
Alex Salmond's party passed the half-way point by taking its 65th seat in a historic win at Kirkcaldy, the first time gains on this scale have been achieved since the Parliament was established in 1999.
The decisive victory comes at the heavy expense of Labour in what were considered heartland territories, and with a collapse in the Liberal Democrat vote.
Labour's defeat led the party's leader Iain Gray to announce that he will stand down in the autumn. Mr Gray only held on to his East Lothian constituency by 151 votes over SNP candidate David Berry, prompting calls for a recount.
The final results for the election put the SNP on 69 seats, Labour on 37, Conservatives on 15, Liberal Democrats on five and Greens on two. Independent MSP Margo MacDonald was also returned to parliament.
The win is further symbolic because Kirkcaldy was considered a solid Labour area, with the overlapping Westminster constituency held by former Labour prime minister Gordon Brown. It also means a referendum on Scottish independence can now be pushed through the Holyrood chamber - a proposal which failed to gain majority support in the last parliament.
Shocks came quickly after polling stations closed on Friday night, with major Labour politicians finding themselves out of a job. Seat after seat in Glasgow, Lanarkshire and Edinburgh fell to the SNP, which also enjoyed a clean sweep of the entire north-east region.
The electoral map of Scotland appeared drastically different, with swathes of SNP yellow stretching unbroken from the Borders in the south to Thurso on the north coast. Candidates once thought of as potential Labour frontbenchers lost out, including former ministers Andy Kerr, Tom McCabe and Frank McAveety.
Former Scottish Conservative leader David McLetchie was unseated in Edinburgh Pentlands.
But the Lib Dems appeared the biggest losers, with heavy falls in the share of votes and a high number of lost deposits, although leader Tavish Scott held on to Shetland.
Posted by Unknown at 00:53