No Longer Change, But Revolution a Necessity 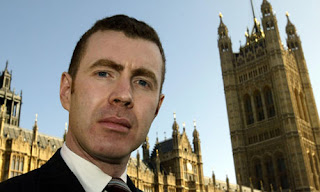 Former MP Price calls for a revolution in our thinking

THE 14 men of Welsh ancestry who signed the American Declaration of Independence epitomised the kind of independent thinking needed in the world today, according to former Plaid Cymru MP Adam Price.
Yesterday Mr Price, who has been studying for a mid-career Masters degree in Public Administration at Harvard Kennedy School, delivered his message to 32,000 graduates, staff and guests at the top American university’s annual graduation ceremony.
Long tipped as a future Plaid leader, Mr Price surprised many when he stepped down from Westminster last year and left for Cambridge, Massachusetts.
He later decided not to seek a seat for this month’s National Assembly election, and will be staying at Harvard for a further year as a Fellow in Harvard’s Center for International Development, where he will study the economic challenges facing small nations like Wales.
With one of his heroes – President Ellen Johnson Sirleaf of Liberia – sitting next to him as he delivered a speech on behalf of all graduates, Mr Price told the audience: “In Harvard Yard in 1775 George Washington’s army was housed here in Hollis Hall, wracked by exhaustion and fear, sustained only by coffee, canteen food and the promise of future happiness – it sounds a bit like finals week.
“Lined up on the opposite bank of the Charles river were hundreds of my Welsh ancestors, the Royal Welch Fusiliers, fighting for the British Army against the American Revolution.
“So I guess I am here to apologise really. You seem to have made a real success of this independence thing. Well done and thanks for leaving us Canada.
“But the people I think about most today are those of my Welsh ancestors that were on this side of the river, fighting for the revolution, who showed an independence of mind and spirit I want to invoke today.
“Fourteen of the signers of the American Declaration of Independence were Welsh, who had found here in America, as I have at Harvard, a space to think and chart their own course; who were inspired by the dream of freedom, first forged here, that is still troubling tyrants from Tripoli to Damascus.
“Unlike the hide-bound British who never broke ranks, the American Revolutionaries knew the value of fighting for each other, yet thinking for themselves. They struck out on their own, and built something new together.”
Referring to the colours of the graduation gowns before him, Mr Price said: “Today we are bathed in a sea of black and crimson. But in this university of knowledge lies a diversity of understanding.
“In the 133 countries represented here today ... it is our differences that give us our distinction
“Yet we live in a world of creeping homogenisation. A blue planet that’s becoming small and grey. Where a language is set to die every 14 days. Where globalisation puts a Starbucks on every street corner. Where Google has made the transfer of knowledge as easy as the click of a mouse. How else would we have finished our dissertations on time?
“Are we all slowly beginning to speak, to see, to sound the same? And even think alike.
“In one recent study half of all college students showed no improvement in their capacity for independent thinking by the end of their sophomore year. Even while sober.
“At its best the university is the incubator of independent inquiry, a cacophony of voices, opinions, arguments, a living debate that reshapes us as we shape it.
“In a world where the deepest problems defy easy resolution, surely the greatest risk is not taking risks at all. So will we have the courage to mount our own quiet revolution?
“Generations ago, there was an army of people drawn here from many lands that rejected the status quo. That turned their world upside down.
“So let’s today salute them: dissenters, the mavericks and heretics, pioneers and prime movers.
“Who know that without our willing to be wrong, we can never be right. That only by questioning what is can we begin to imagine what might be. That it’s in our originality we will find humanity’s greatest hope.”

Some day Adam Price will be back home in Wales, to reinvigorate Plaid Cymru and bring original thinking and revolutionary ideas into the administration of Wales. Change has become a much-overused word, bandied around by all political parties. As a result it has lost impetus and meaning and the world still awaits a truly radical change in the thinking of many dyed-in-the-wool politicians and administrators. An exception is Alex Salmond, the chief minister of Scotland. Wales/Cymru awaits the kind of leadership and vision which he epitomises. Change must give way to revolution in which the world is transformed out of all recognition and Welsh society and economics along with it.
Posted by Unknown at 23:36