Mr Llwyd will tell his party's conference that Labour has 'u-turned' by coming to support policies Plaid advanced before the general election.Plaid Cymru's parliamentary leader Elfyn Llwyd is to accuse Welsh Labour of "bare faced hypocrisy".
These include reform of the Barnett formula by which Wales is funded, and the referendum on further Welsh powers.
Saturday will also feature a speech from the former Labour Welsh Secretary, now Plaid candidate, Ron Davies.
Mr Llwyd is expected to say: "I have been astonished, as I'm sure have people across Wales, by the bare faced hypocrisy we have seen of Welsh Labour since the general election.
"We have seen a string of Damascene conversions in the Labour ranks in Westminster.
Continue reading the main story

The people of Wales are not that gullible”

Elfyn Llwyd MP
"Barely a week after the election, the referendum on greater powers for Wales, which many Labour MPs fought hard against, was suddenly a hot topic amongst previously sceptical MPs.
"They pleaded with David Cameron for it - forgetting that it was Gordon Brown and Peter Hain who were holding it back in any case."
Mr Llwyd is expected to claim that Labour in government "laughed" at any notion that the Barnett formula, which determines the Welsh block grant from Westminster, was "unfair to Wales".
He will argue: "Now they agree that what we in Plaid said was correct all along. Pity that not a single one of them had the backbone and the respect for the people of Wales to speak up during their 13 years in power!
"Plaid Cymru has been at the forefront of this battle for years, with Labour sitting idly by.
"While I welcome their support, it must be taken with a pinch of salt. How can anyone believe them after only thirteen years of being in a position of power and when could have made a difference - only now has Labour found a voice!"
New Labour

The Plaid Parliamentary Leader will argue that the current Labour leadership contest proves that that party has not learned anything.
He'll say: "Whichever Millibrother wins the leadership contest they will be cut exactly from the Blair/Brown cloth.
"The people of Wales are not that gullible. Labour - you may be stealing our policies, you may be stealing our clothes but you will never steal our integrity.""They were uncritical, uber-loyal disciples of New Labour. Ed Balls might well end up Chancellor one day - the biggest supporter of Barnett - Labour seemingly hasn't learnt any lessons of late.
Ron Davies, who as Labour Welsh Secretary drew up the Government of Wales Act which brought devolution and national assembly into being, will now stand as a Plaid Cymru candidate in his former seat of Caerphilly at next May's assembly election.
Mr Davies was given a warm ovation by delegates when Plaid Leader Ieuan Wyn Jones paid tribute to him in his speech yesterday.
The former Labour minister is due to address the conference at around 14.45 BST. 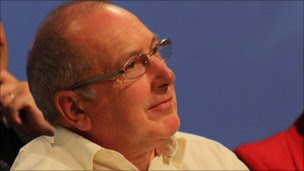