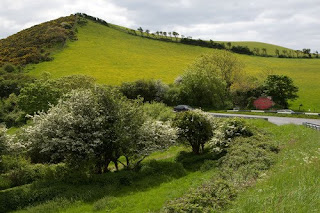 To mark the occasion, there will be a parade in Bala, followed by a short event at the memorial chapel at the side of Llyn Celyn.

The following group has more details:

and you can also list yourself as attending on the same page.

Please make every effort to attend, and also pass on news of the event to anyone you feel may be interested.


Death of a community

Capel Celyn was a small village in the quiet Tryweryn valley in the hill country between Bala and Ffestiniog in North Wales. In and around it lived about seventy people and the community was steeped in the Welsh tradition. The people earned their merely modest living through farming, and their social life, with its strong cultural stream and chapel base, followed an old and rich pattern. The village was in the Penllyn district, the home of penillion, which is the singing of verses to the accompaniment of the harp, and there were many harps in the village. People met for hour upon hour of singing, poetry, reading and the special verse-arts of the Welsh language. Indeed, Capel Celyn, although an obscure settlement, was a precious and largely unspoiled nugget of Welsh values.
Today, however, the name of the valley, Tryweryn, is, for many people in Wales, a shorthand expression for a whole chapter of emotions, and the word is painted on walls and bridges up and down Wales. So is the slogan Cofia Dryweryn - Remember Tryweryn. For the corporation of Liverpool, with measured arrogance, and without consulting anyone involved, announced that it would have the valley as a reservoir and proceeded to do just that. The harps have vanished, for Capel Celyn no longer exists; farms, school, chapel, store, cottages, are at the bottom of a silent lake.
The episode of Tryweryn was a traumatic one and it is one of the keys to what has been happening in Wales in recent years. From it sprang a great anger and a hardening of resolve; for many men and women it was an awakening, the first indication that the values of Wales were in danger and were meaningless to the authorities in England; it started people thinking and, for a small group of men, it was the last straw that made them channel rage into a cold determination to strike blows for Wales with stolen gelignite and time switches. The bomb attacks on water pipelines and government offices went on for more than four years, but the reverberations of Tryweryn are being felt still. (Fishlock, Wales and the Welsh)