Great Speech as Ron Davies Embraces the Cause 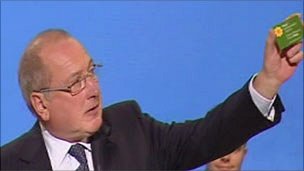 Ron Davies showed delegates his Plaid membership card
Former Labour Welsh Secretary Ron Davies turned on his old party at Plaid Cymru's annual conference.
Mr Davies, a Plaid candidate in the assembly elections, got a standing ovation before his speech.
He said Labour had been left as a "busted flush" for making too many compromises during its 13 years in power in Westminster.
But earlier former Plaid chairman John Dixon claimed "mixed messages" from his party on its nuclear power position.
Mr Davies has been called the "architect of devolution" when as Labour Welsh Secretary, he drew up the Government of Wales Act.
But he quit Tony Blair's Cabinet in 1998 after his well-publicised "moment of madness".
Mr Davies, who gave up his his assembly seat before the 2003 election, is standing as a Plaid Cymru candidate in his former constituency of Caerphilly at next May's assembly election.
He stood as an independent candidate in the constituency in 2007 and campaigned for Plaid in the 2010 General Election.
Mr Davies was given a warm reception by delegates when Plaid Leader Ieuan Wyn Jones paid tribute to him in his speech yesterday, and was given a standing ovation when he arrived at the platform to speak.
He said Labour had been left as a "busted flush", after making too many compromises in its 13 years in office.
Mr Davies, a Caerphilly councillor, claimed that Labour had failed to deliver the kind of Wales that he had expected to see, when they came to power at Westminster in 1997 and this was because "the Labour Party is a London party".
He told delegates that Plaid shouldn't have to rely on Labour in Wales to deliver improvements to people's lives and that they had to become the lead party in any future coalition government in Cardiff Bay.
"Only Plaid has the courage to say that in this complex, competitive, inter -related World, decisions are taken best by the people most closely involved."
There were also attacks on Labour - as well as the new Lib Dem-Tory coalition - in speeches by Helen Mary Jones, and Plaid's parliamentary leader Elfyn Llwyd, who accused Welsh Labour of "bare faced hypocrisy".
Continue reading the main story
These include the referendum on greater assembly powers.
In his speech, Mr Llwyd said: "I have been astonished, as I'm sure have people across Wales, by the bare-faced hypocrisy we have seen of Welsh Labour since the general election.
"We have seen a string of Damascene conversions in the Labour ranks in Westminster.
"Barely a week after the election, the referendum on greater powers for Wales, which many Labour MPs fought hard against, was suddenly a hot topic amongst previously sceptical MPs.
"'When can we have it' they pleaded with David Cameron - forgetting that it was Gordon Brown and Peter Hain who were holding it back in any event."
Mr Llwyd claimed that Labour in government "laughed" at any notion that the Barnett formula, which determines the Welsh block grant from Westminster, was "unfair to Wales".
He argued: "Now they agree that what we in Plaid said was correct all along. Pity that not a single one of them had the backbone and the respect for the people of Wales to speak up during their 13 years in power!"
Continue reading the main story

We have succeeded as a party in giving the impression that we are utterly opposed to any new nuclear power station, anywhere, where nobody wants to build one; and that we're happy to support it where they do”

But that amendment, supported by Plaid leader and the island's AM Ieuan Wyn Jones, was carried by the conference.
Mr Dixon said: "The danger in passing what is before us today is that we end up continuing to send mixed messages.
"We have succeeded as a party in giving the impression that we are utterly opposed to any new nuclear power station, anywhere, where nobody wants to build one, and that we're happy to support it where they do."
Plaid's policy, reaffirmed in Saturday's vote, is one of "total opposition to the construction of any new nuclear power stations in Wales."
The amendment to that policy, also carried by delegates, affirmed the decision on whether to build a new nuclear power station at Wylfa was "a matter for the UK government".
But it adds: "If the station is given the go ahead, conference believes that the main economic benefit should accrue to the local community in terms of construction jobs, supply chain opportunities and the skills necessary for the operation of the station once completed."
Mr Jones said: "There are, on occasions, some of those difficult decisions that we all have to face. They are decisions, sometimes, we wish we didn't have to take.
He said it was important if a nuclear station came that the jobs went to local people and the local economy benefits. 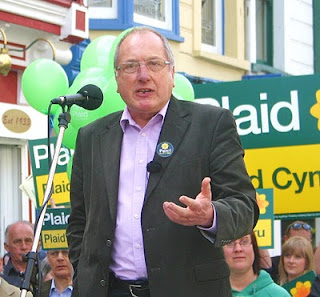 Read the text of a speech here supporting the Plaid candidate in Aberystwyth:
http://www.socialistunity.com/?p=5714
Posted by Unknown at 08:54