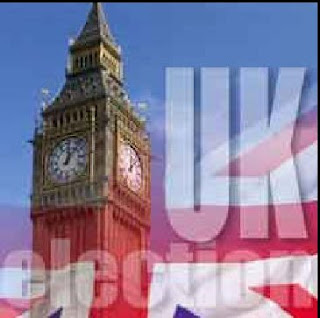 
The Election
The Conservative Party will win with a small working majority of seats, and will govern with the support of the Lib Dems*.
The Liberal Democrats will do better than everyone expects or polls suggest.
Smaller parties - the SNP, Plaid Cymru, the Greens, UKIP will do well.
Large numbers of the electorate, almost 50%,  will not cast their vote.
The fact is that the majority of people are disillusioned with all politicians and in particular those of the major parties, therefore they will abstain from voting or will cast a protest vote, benefiting independents and smaller parties.
There will be change but not major change. Whether Britain will have a fairer society remains to be seen.
Comment:
A boost late in the campaign meant that the number of people casting their vote increased to 65%.
The nationalists made no progress and remained with the same number.
The Lib Dems failed to capitalise on their popularity during the campaign.
The Greens elected their first MP.
Gordon Brown is down but not out. He should do the right thing and resign.


Having said that, the voters got what they wanted. They did not want Gordon Brown to remain in power for another 5 years. They understood that a large vote for the Lib Dems would allow Labour to stay in power as the largest party and they did not want that. What they wanted is what they got - a Conservative government in alliance, or with the support of, the Lib Dems. Thus the change which was so desperately needed was possible. The only downside is that the Labour front-benchers will be back in Parliament  with their smirks and grimaces and inane grins except that they will no longer try to treat the public as fools.
Posted by Unknown at 01:31

The Liberal Democrats will do better than everyone expects or polls suggest.


Smaller parties - the SNP, Plaid Cymru, the Greens, UKIP will do well.

Large numbers of the electorate, almost 50%, will not cast their vote.

“We increased Plaid’s vote by over 50% in Clwyd West and secured one of the biggest swings to Plaid in the whole of the country.

“Our campaign has reinvigorated the party locally with new members, activists and supporters coming forward to help with our work and we are grateful to them and to the thousands of voters who have supported us.

“This result gives us a strong platform upon which to build for next year’s Assembly election where Plaid was just 1800 votes behind last time.”