Celebrate the Welsh Prince of Wales 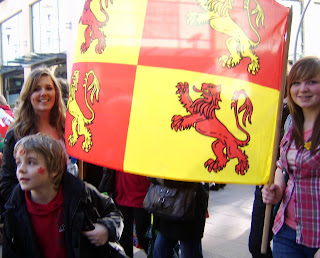 Yes, for those of you who did not know,tomorrow(Mai 28th) is our Prince's birthday.OwainGlyndŵrwas born on28 Mai1354.
..

..
. Family links with Gwynedd were weak but Glyndŵr sought Welsh royal rights by claiming descent from the Gwynedd Royal Families, and recognised Gwynedd as the Gwlad of the 'High' Kings and Princes of Wales. Thus, yes, the Four Lions Rampant 'Baner Glyndŵr' was inspired by 'Baner Llywelyn' the last Prince of Gwynedd and 'PuraWallia but, Glyndŵr wished to make it absolutely clear that he was seeking to be a native Prince for all of Wales and not just those areas that were once under the authority of 'Baner Llywelyn' so he adapted the 'Llywelyn Baner' to display the four 'passive lions' as being 'rampant' so, logic follows surely, that if we are to be absolutely true toGlyndŵr's cause for an all Wales independent of English rule, then we must one and all accept that the only true baner for such a cause is the 'Four Lions Rampant' of Owain Glyndŵr.. 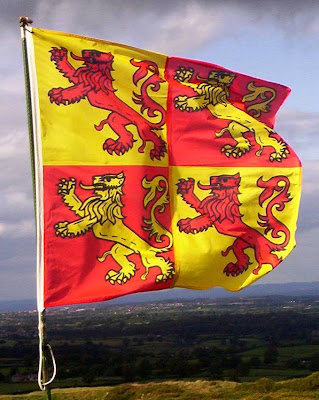 .Llysgenhadaeth Glyndŵr has been actively promoting the flying ofBaneri Glyndŵr since we were established in 1998. It is now flown widely on Dydd Glyndŵr - 16 Medi annually by national institutions such as the Welsh Assembly, the Millennium Stadium, County and Town Councils, Universities, the National Library and other Libraries, Castles, schools and on the homes of individual patriots throughout Wales and beyond. I addition, many businesses such as hotels, pubs, caravan, holiday parks and, indeed, whole streets of shops in towns such as the towns of Pwllheli, Caernarfon, Porthmadog,Penrhyndeudraeth, Dolgellau and Machynlleth now display seas of 'Baner Glyndŵr' throughout the summer months.
.
Posted by Unknown at 09:41