The Need to Restore Civil Liberties 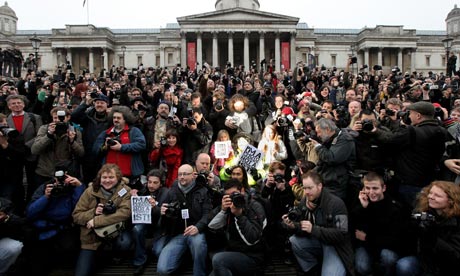 Photographers stage a protest in Trafalgar Square in January against the use of police anti-terror stop and search powers which they believe the police are using to intimidate people with cameras. Photograph: Oli Scarff/Getty Images
A photographer who prompted a debate over police powers last year when he was apprehended for taking photographs of a London church was subjected today to an almost identical stop and search under anti-terrorist powers while trying to photograph the capital's skyline.
Grant Smith, a renowned architectural photographer, was taking photographs at One Aldermanbury Square, near London Wall, when he was stopped by officers from City of London police.
He said they prevented him from using his camera to film the stop and search, and held his arms behind his back as they searched through his possessions.
It is the second time in six months that Smith has been stopped by City police under section 44 of the Terrorism Act, which allows officers to stop and search anyone without need for suspicion in designated areas. In December, the police stopped him from photographing the spire of Sir Christopher Wren's Christ Church. His treatment prompted a public debate over anti-terrorist powers, and led to several senior officers appearing to rein in the inappropriate use of the laws.
Today, in a repetition of the earlier stop and search, Smith said he was first approached by a security guard asserting he could not photograph a building. When he asserted his lawful right to continue taking images, police were called.
He said two uniformed officers detained him, one by grabbing his arms behind his back, and refused requests to record the stop and search on his camera. He added that they even refused to let him use a pen and paper to note down their details.
He was told he was being held under section 44 because of his "obstructive and non-compliant attitude", and said police left him feeling "humiliated" after manhandling him in front of office workers.
When the search was over, he asked the officers if he could continue taking photographs. "There was an interesting display of petulance," he said. "They just turned their back on me and walked away."
Days after the first incident, John Yates, assistant commissioner at the Metropolitan police and Britain's senior counter-terrorism officer, wrote to all London borough commanders reminding them there were no laws to stop people photographing buildings and encouraging their officers to use "common sense".
The Association of Chief Police Officers had warned days before Grant was stopped in December that the "use of cameras by the public does not ordinarily permit use of stop and search powers".
Earlier this year, the European court of human rights ruled that the "arbitrary" stop and search of people under section 44 without suspicion was illegal.
In a statement about Smith's second stop and search, City of London police said: "A man was spoken to by officers earlier today after police were called by security personnel. He was later searched under terrorism powers."
Posted by Unknown at 01:11