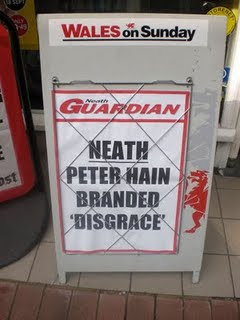 Now is the time for Plaid Cymru to begin preparations to mount a strong campaign throughout the Neath/Port Talbot area to oust Peter Hain MP from the parliamentary constituency once and for all. The Secretary of State for Wales is a blight on the future course of the nation and his statements and actions are calculated to hold back and even reverse progress towards the holding of a Referendum leading to the establishment of a Welsh Parliament. Along with other members of the political establishment and with the support of a number of unionist MPs Peter Hain is an obstacle along the path to national development and cultural empowerment as Wales prepares to take its place as a nation of Europe and relinquish its ties with the United Kingdom.

Peter Hain in no sense represents the true interests of Wales and should be dispatched to his country estate forthwith. He is the last in a line of Secretaries of State who hold the position at the Wales Office purely in order to control and regulate Welsh Affairs to keep them in line with unionist beliefs and government dictates. As was initially surmised, the Legislative Competence Orders (LCO) have been an unmitigated failure and have had the effect of slowing down progressive devolution and limiting beneficial projects already agreed by the Welsh Assembly. The question is: why should the Welsh Assembly have to go "cap in hand" to Westminster in order to obtain approval for legislation which it has already debated and agreed in a democratic manner?

The Welsh Assembly is a puppet of Westminster against its will and a proper parliament with full powers to legislate on all matters of concern to Wales is an essential for the nation to grow and achieve stature in Europe. Let all those who hold the interests of Wales dear to their hearts join together in a campaign to oust Hain.

IRAQ -  On British Complicity: "The problem with the UK advocating torture and supporting dishonesty is that it undermines the legitimacy and credibility of democratic, Western states and makes it impossible to put the case for human rights to some of the world's more oppressive societies. The UK will find it difficult to lecture anyone on torture now, and that is a shame."
Welsh Ramblings Blog
Posted by Unknown at 16:11

Hain is a disgrace. You're quite right to want to be rid of him. Wasn't he caught out with his fingers in the till when he tried for the deputy leader's position.

It seems to me that if he can't manage the finances of a tiny liettle campaign, in which, as I recall, he came last, he probably shouldn't be the Viceroy of Wales.

On a personal note I find him repugnant.