Scots back Government over US Megrahi claims


Yet Iain Gray, the Labour leader in the Scottish parliament, said today on a television interview that Scots overwhelming oppose the release of Al-Megrahi and think he should have been kept in a Scottish prison.
Someone has got their facts wrong.... who could it be? 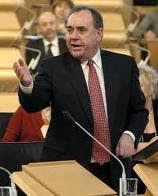 Earning money online never been this easy and transparent. You would find great tips on how to make that dream amount every month. So go ahead and click here for more details and open floodgates to your online income. All the best.