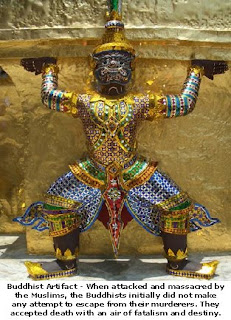 Archaeologists in Afghanistan, where Taliban Islamists are fighting the Western-backed government, have uncovered Buddhist-era remains in an area south of Kabul, an official said on Tuesday.Skip related content
"There is a temple, stupas, beautiful rooms, big and small statues, two with the length of seven and nine meters, colourful frescos ornamented with gold and some coins," said Mohammad Nader Rasouli, head of the Afghan Archaeological Department.
"Some of the relics date back to the fifth century (AD). We have come across signs that there are items maybe going back to the era before Christ or prehistory," he said.
"We need foreign assistance to preserve these and their expertise to help us with further excavations."
The excavation site extends over 12 km (7.5 miles) in the Aynak region of Logar province just south of Kabul, where China is mining copper ore as part of its multi-billion dollar investments in the Central Asian country.
Rasouli said the mining work had not harmed the sites -- which were known but had not been examined in detail -- but smugglers managed to loot and destroy some relics before the government excavation work began last year.
Government and foreign troops are battling an insurgency led by the radical Taliban movement which destroyed Buddhist statues at Bamyan during its five-year control of the mountainous country from 1996 to 2001, viewing the monuments as an affront to Islam.
Many antiquities and historical sites were destroyed or pillaged during decades of civil war and foreign interventions.
Now almost entirely Muslim, Afghanistan has seen eras in its long history when other faiths such as Hinduism, Buddhism and Zoroastrianism were widely practised.
Rasouli said the government did not have the resources to move the relics from the remote area, which has seen some clashes during the insurgency, but hoped to build a museum there instead.
(Reporting by Sayed Salahuddin; Editing by Andrew Hammond and Sanjeev Miglani)
Posted by Unknown at 02:03