Cornwall Not England - Brittany Not France 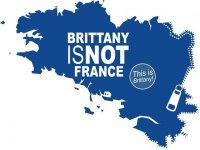 The report of the General Secretary (GS) to the Celtic League AGM held in Mannin last weekend (10/11 July) included a resume of developments in Brittany in the past year.

He said there have been some important initiatives undertaken associated with campaign including the creation of a `Freque Humaine' in the Breton city of Nantes/Naoned, where over 2000 people turned up to make the symbol 44=BZH ahead of the Municipal elections.

Activists have also kept the pressure up on the issue by drawing public attention to reunification through graffiti. In one such instance in April 2010, a youth who had been daubing reunification slogans in the town of Le Mans was arrested by police, detained for several hours and verbally assaulted during that time. The AGM was advised that the Celtic League had registered concerns over this case with the French authorties and the Council of Europe

The Breton Regional Council moved one step closer in June 2010 by introducing a motion regarding the reform of the `territorial collective', which could make it easier for Brittany to join with Loire-Atlantique. There are nevertheless the GS reported still a large number of obstacles to be overcome before reunification becomes a reality.

(Language development) The General Secretary said a new Breton language preschool movement has been set up at the end of last year in Breizh and already has a number of toddler, parent groups and preschools in the west. The organisation is called `Divskouarn' and the person in charge of running it is called Gregor Mazo.

A Programme about the Breton language was shown on Al Jazeera (English). The programme said that in `France' a battle to save a dying language is being carried out. Breton is spoken by about 200,000 people in France. 80-years-ago, it was more than a million. Estelle Youssouffa presented the programme and tried to show that campaigners believe Breton will make a comeback (programme broadcast on 15 May 2010).Watch the programme here.

A sponsored run to raise funds for the Breton language, Redadeg, was held again this year in May. This is the second time that the run has been held and is based on the Basque Korrika. Ar Redadeg is planned to be held every other year and it has been successful in raising significant amounts of money for the Breton language. This year a number of Welsh and Cornsh people took part in the race. The race covers more than 1200 km in six days all over Breizh to promote the Breton language and culture. It was hoped inter Celtic participation would increase next year.

(Bugaled Breizh) The continuing struggle of the families of the crewmen who died on the French fishing vessel was reported to the AGM by both the GS and a delegate from Brittany. The involvement of a naval vessel (submarine) was still a live line of enquiry. The AGM affirmed its commitment to support the campaign.

(Politics) The GS provided a detailed outline of political developments and specifically focused on the Regional elections in March 2010.

(ABP) He concluded his Breton report with an update on our cooperation with the Agence Bretagne Presse news agency and the AGM recorded its thanks to that organisation for its work in publicising news items from the Celtic League and inter-Celtic issues.

The Celtic League has branches in the six Celtic Countries. It works to promote cooperation between these countries and campaigns on a broad range of political, cultural and environmental matters. It highlights human rights abuse, monitors all military activity and focuses on socio-economic issues.