Scotland's Independence - It's Now or Never! 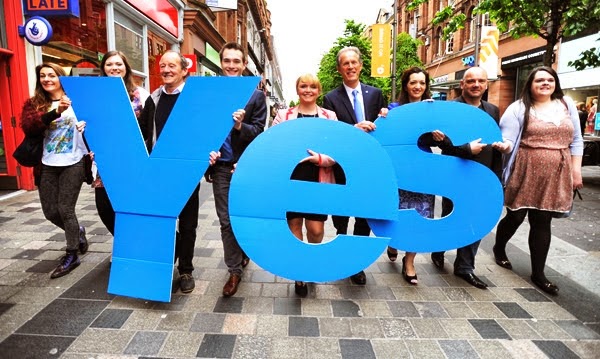 
Could Scotland become a successful independent country? Of course! Even No politicians agree:

“Supporters of independence will always be able to cite examples of small, independent and thriving economies across Europe such as Finland, Switzerland and Norway. It would be wrong to suggest that Scotland could not be another such successful, independent country”
~ David Cameron

As an independent country, taking into account all our resources, we’d be the 14th wealthiest in the OECD (described as the “rich nations’ club”). This compares to UK at 18th.  With independence we can make this wealth work much better for the people living here - and that is why a Yes is so important.
No politicians want us to believe we are too poor to be independent, but the reality is very different: Scotland’s got what it takes to prosper with a Yes:
Few, if any, of the 200 or so other countries in the world can have been as well prepared for independence as Scotland is. Scotland is more than ready! And we’ve got strong economic and financial foundations
All this adds up to a country that could be wealthy and prosperous.
In fact, if you divide our national wealth by our population, Scotland is wealthier than France, Italy and the UK. So if Scotland “can’t” be independent, who can?
PROVISO
It all depends on the floating vote, the undecided. The majority need to vote YES for independence to be achieved, and it also depends on a substantial number of voters switching sides to vote YES. The momentum is with the YES campaigners. Keep up the pressure in order that a majority of Scots vote YES.

PROVISO
Posted by Unknown at 10:21