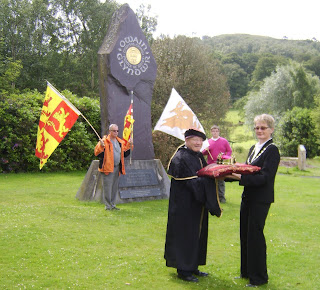 The 18th began with the annual 'Displaying of the Glyndŵr Crown (the nation's symbol of Sovereignty) Parade'. The parade was welcomed at Y Plas by the Mayor of Machynlleth and a number of councillors and the crown was transferred to the mayor by its Custodian, Elfyn Rowlands of Cefn Caer, Pennal.

TRIBUTES: Glyn Rowlands had sadly passed away last year and this year saw the departing of Mr John Parsons, the long serving clerk of Machynlleth town council. Both these men had been very supportive and helpful to Embassy Glyndŵr in regards to our work with Machynlleth from the onset and a tribute was paid to both men by myself on behalf of Embassy Glyndŵr. During this tribute, I pointed out that there was another interesting connection between Glyn and Mr Parsons as Mr Parsons had been Glyn's Solicitor during the FWA trial of 1969. A minute's silence took place to remember the two loyal friends. Mr Parson's widow was present at this touching tribute. 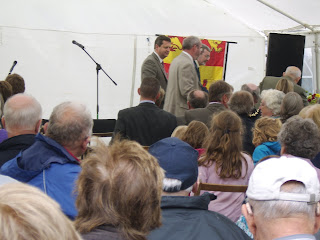 The Mayor carrying the crown was followed back through the town and to the Senedd-Dŷ where the Mayor and the Custodian of the Crown placed the Crown for exhibiting to the public during the afternoon. At this time, events had commenced on 'Parliament Green' as part of the festival and the children were entertained by Cwmni Cortyn (puppet show) Mair Tomos Ifans and other local talent whilst the grown ups were entertained by Lazarus until the programme for the official re-opening of the Senedd-Dy commenced.
Lazarus entertained at the Owain Glyndŵr pub during the evening.
Posted by Unknown at 11:54