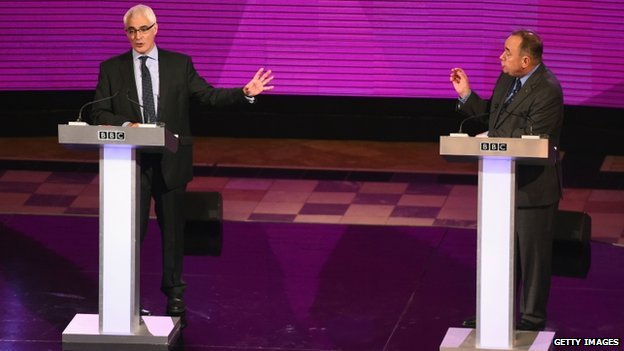 Scotland's First Minister Alex Salmond and Better Together headAlistair Darling have clashed in their final TV debate ahead of the referendum.
Oil revenues, currency and the future of nuclear weapons were among the subjects of a heated discussion.
Mr Salmond said his opponent was siding with the Tories on policies which would push Scottish children into poverty.
Mr Darling rejected the charge and again challenged Mr Salmond to reveal his currency Plan B.
Following the debate, a snap poll by The Guardian newspaper and polling company ICM suggested Mr Salmond's score was 71%, against Mr Darling's 29%.

From the start it was clear that Darling, who won the first debate, was edgy and nervy whilst Salmond was better prepared and more confident.
Scotland's first minister had come prepared to answer the question that damaged him a few weeks ago - what's your Plan B? - if Westminster refuses to share the pound with a newly independent Scotland.
He declared he had not one but three Plan Bs but what he was seeking was a "mandate" from the people of Scotland - a word he repeated again and again - to negotiate to share the pound.
Salmond had also come with a new line of attack. He argued that the only way to protect the NHS and to stop welfare cuts was to ensure that the people of Scotland always got the government they voted for.
He accused Darling - to the former Labour chancellor's obvious fury - of "being in bed with the Tories". His aim was clear - to increase the risks in voters' minds of a No vote.
Continue reading the main story

The 90-minute broadcast was screened on BBC One Scotland, and to the rest of the UK on BBC Two.
The format saw the two political leaders deliver their opening addresses, before the debate moved on to four topics, each of which was introduced by a question from the audience.
Mr Salmond and Mr Darling were then each given the opportunity to cross-examine their rival for eight minutes.
The first minister opted to focus on the welfare state, saying Westminster reforms were pushing an estimated 100,000 Scottish children and a similar number of disabled people into poverty.
He said: "Yes we've got troubled economic times, but the mark of a government is when you are in difficult economic times you don't take it on the disabled and you don't take it out on families with children and you don't impose the bedroom tax, which must be the most ludicrous tax of all time."
Welfare reforms

Mr Darling said as a Labour MP he did not support the UK government's welfare reforms.
But he argued that Scotland's ageing population meant it was better if the costs of providing social security were spread across the UK as a whole.
The Labour MP said: "No-one could support people who need help being denied, no-one could possibly support that. We have an obligation to help people who need support.
"However, to do that you need the means to do it. What concerns me is if you end up in the situation where you are cutting off opportunities for firms that generate wealth and therefore generate taxation, to pay for these things, it is going to be less likely you can provide the level of support you need in the future."
Earlier, Mr Darling had again pressed the first minister to spell out his Plan B on currency, if the rest of the UK refused to enter into a formal sterling currency union with an independent Scotland.

Watch some of the highlights...

He put it to Mr Salmond: "You are taking a huge risk if you think it is just all going to fall into place.
"I think the currency union would be bad for Scotland because our budget would have to be approved not by us, but what would then be a foreign country. It wouldn't be best for the rest of the country either."
Mr Salmond responded: "I set out the options very clearly - three Plan Bs for the price of one. They are just like buses... you expect one and then three turn up at once."
He added: "We don't need permission to use our own currency. The argument actually is that they will deny us the assets of the Bank of England. The reason that won't happen is that if you deny us the financial assets, then the UK will get stuck with all of the liabilities."
Mr Salmond said no chancellor would let Scotland get away with escaping its share of the debt liabilities and therefore a currency union would be agreed. 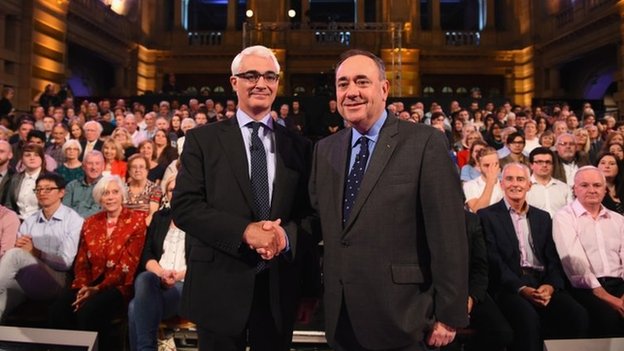 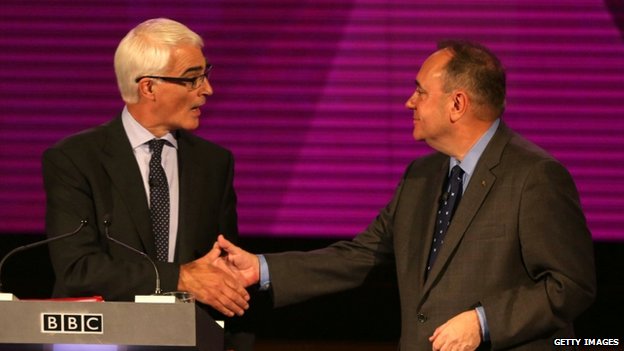 But Mr Darling argued: "If your first message in the world is here we are, here is Scotland, and by the way we've just defaulted on our debt, what do you think that would do to people who are lending us money in the future?
"Nobody would lend us any money in the future."
Mr Salmond had won a pre-debate coin toss and opted to deliver his opening address first, with Mr Darling going second.
Putting the case for independence, the first minister started by saying the eyes of the world were focused on Scotland.
He cited the 1979 referendum, when Scotland did not get a devolved assembly despite voting in favour of it, and said the country got 18 years of Tory rule instead.
Mr Salmond said: "Just like in 1979 the prophets of doom tell us we can't do it. We can't do what every country takes for granted - and just like then they are wrong.
"We are a rich nation, a resourceful people. We can create a prosperous nation and a fairer society. A real vision for the people of Scotland. This is our time, it's our moment - let us do it now."

How did social media see it? 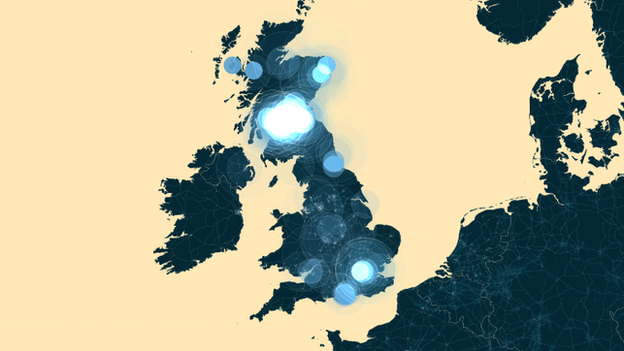 The debate was trending in the UK but, more surprisingly, hit the trending charts in Malaga, Gibraltar, Seville, and Spain as a whole. Were Spanish people keeping an eye on the debate with the Catalonian independence movement in mind? The debate generated a total of255,559 tweets.
Throughout the debate, #bbcindyref, #indyref, and #scotdecides were trending in the UK on Facebook, and #bbcindyref and #indyref began trending globally by the end of the debate.

Mr Darling opened by saying Mr Salmond was "asking us to take his word for it on everything. No Plan B for anything. Trust what he says - sorry I can't".
He said Mr Salmond wanted a separate state no matter what the risk or what the costs.
But he said a "No" vote would not mean the status quo, and said the pro-Union parties would deliver increased devolution.
He added: "This is a decision for which there is no turning back. Our children and the generations that follow will have to live with that decision."
The event was staged at the Kelvingrove Art Gallery and Museum in Glasgow, and was hosted by BBC Scotland's Glenn Campbell.
The audience of 200 was selected by polling and research consultancy ComRes.
The debate was split into four sections;
The issues section saw the two politicians debate four topics entitled Economy, Scotland at Home, Scotland in the World and What Happens after the Vote.
Each of the four issues was introduced by a question from the audience.
The first leaders' debate aired on STV on 5 August, with both sides claiming victory.
Scotland will go to the polls in the referendum on 18 September, with voters being asked asked the "Yes/No" question: "Should Scotland be an independent country?"

Do you have questions?

As the people of Scotland weigh up how to vote in the independence referendum, they are asking questions on a range of topics from the economy to welfare.
In a series running up to polling day, BBC correspondents are looking at those major questions and by using statistics, analysis and expert views shining a light on some of the possible answers.
The issues they have looked at include Trident, Scottish economic growth, broadcasting, population, health and UK debt.
Posted by Unknown at 02:17